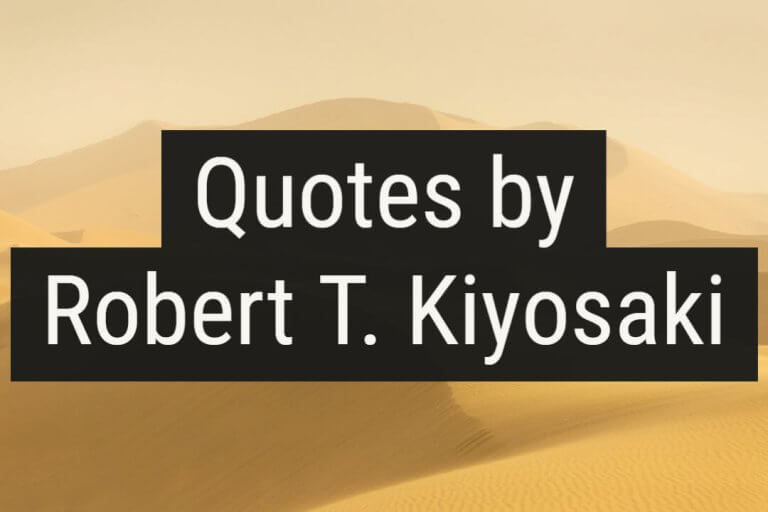 The book was published in 1997 and has since been translated into 51 languages and sold over 26 million copies worldwide.

He has written a number of books on investing, entrepreneurship, real estate, and financial education for children.

“It’s not what you say out of your mouth that determines your life, it’s what you whisper to yourself that has the most power!”

“Choosing what we think rather than reaction to our emotions. ”

“Often in the real world, it’s not the smart that get ahead, but the bold.”

“Real estate investing, even on a very small scale, remains a tried and true means of building an individual’s cash flow and wealth.”

“Money is a powerful force. don’t use it against you. If your self-discipline and financial intelligence are low, money will run over you. It will be smarter than you to take over your life.”

“Anger is a big part of that formula, for passion is anger and love combined.”

“Don’t let the fear of losing be greater than the excitement of winning.”

“Be not afraid of growing slowly; be afraid only of standing still.”

“Making more money will not solve your problems if cash-flow management is the problem. The people who understand the power of financial numbers have power over those who do not.”

“Taxes punish those who produce and reward those who don’t produce.”

“I want to teach you to master the power of money, instead of being afraid of it. They don’t teach that in school and, if you don’t learn it, you become a slave to money.”

“I just invent, then wait until man comes around to needing what I’ve invented.”

“You not only change what you do, but in a very real way, you also change who you are. Or at least, how you think.”

“Workers work hard enough to not be fired, and owners pay just enough so that workers won’t quit.”

“This was a simple example of how money is invented, created, and protected using financial intelligence.”

“Find an opportunity that everyone else missed.”

“And in my own small way, I would like to be part of this unprecedented evolution of humanity, the era where humans work purely with their minds and not with their bodies. Besides, it is where the action is. It is what is happening. It’s hip. It’s scary. And it’s fun.”