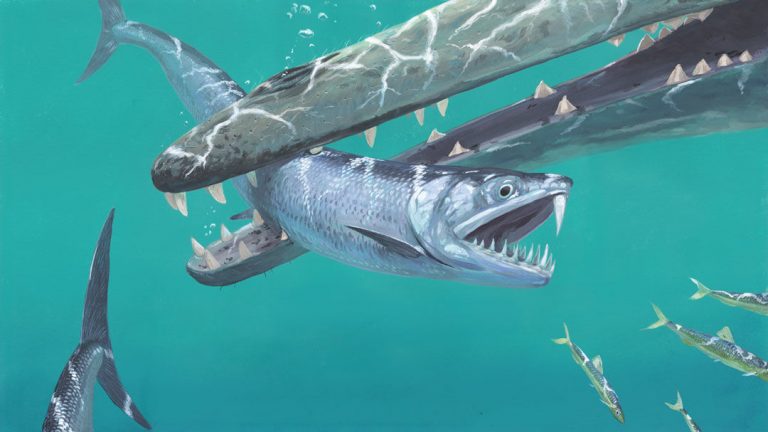 Dinosaurs and large predators went extinct some 65 million years ago, but there a few species lived through all these years evolving themselves. The plankton hunting anchovies that we eat today were fish eating predators,according to a new study.

Researchers examined a 30-centimeter-long fossil embedded in a rock formation near Chièvres, Belgium, and another partial fossil from Pakistan’s Punjab province. They were between 41 million and 54 million years old, with both shared a peculiar feature: a single saber tooth in the upper jaw.

Micro-computed-tomography(a scaled down version of the technique doctors use to scan our body at the hospital) was used to get the high-resolution images of the fish skulls. The images revealed rows of fangs on the fishes’ lower jaws and a pointy saber tooth on the upper jaw. The fossil from Pakistan was new species, and researchers named it Monosmilus chureloides after the churel—a shapeshifting creature with sharp fangs that features in many South Asian legends.

Both specimens are believed to be the close cousins of today’s anchovies, according to the researchers. But unlike their relatives, these ancient anchovies likely to have used their fangs to catch their prey,written by the researchers at Royal Society Open Science.