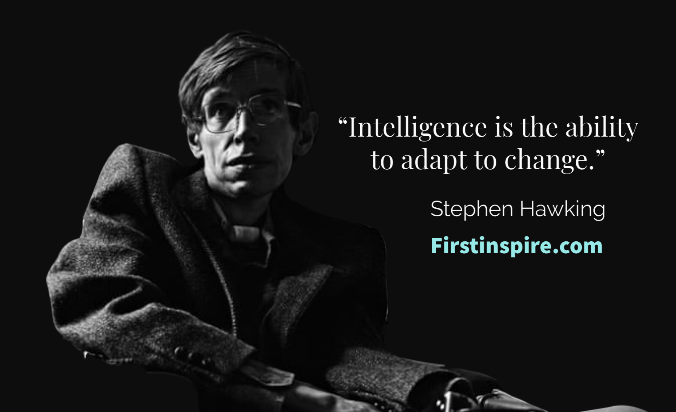 Stephen Hawking was an English theoretical physicist, cosmologist, and author who was director of research at the Centre for Theoretical Cosmology at the University of Cambridge. Hawking had a rare early-onset slow-progressing form of motor neuron disease (MND; also known as amyotrophic lateral sclerosis (ALS) or Lou Gehrig’s disease), a fatal neurodegenerative disease that affects the motor neurons in the brain and spinal cord, which gradually paralyzed him over decades. He is considered the best theoretical physicist in the world and has inspired millions to pursue their dreams against all odds. Here are some of the best Stephen Hawking quotes to motivate and inspire you.

“Quiet people have the loudest minds.”

“Life would be tragic if it weren’t funny.”

“One of the basic rules of the universe is that nothing is perfect. Perfection simply doesn’t exist…..Without imperfection, neither you nor I would exist”

“Although I cannot move and I have to speak through a computer, in my mind I am free.”

“If time travel is possible, where are the tourists from the future?”

“People who boast about their I.Q. are losers.”

“The thing about smart people is that they seem like crazy people to dumb people.”

“I don’t think the human race will survive the next thousand years, unless we spread into space.”

“It matters if you just don’t give up.”

“Nothing is better than reading and gaining more and more knowledge.”

“One is always a long way from solving a problem until one actually has the answer.”

“Scientists have become the bearers of the torch of discovery in our quest for knowledge.”

“Work gives you meaning and purpose, and life is empty without it.”

“Eternity is a long time, especially towards the end.”

“Be brave, be curious, be determined, overcome the odds. It can be done”

“We each exist for but a short time, and in that time explore but a small part of the whole universe”

“People won’t have time for you if you are always angry or complaining.”

“You cannot predict the future.”

“I am very aware of the preciousness of time. Seize the moment. Act now.”

“The human capacity for guilt is such that people can always find ways to blame themselves.”

“Today, we commit to this next great leap into the cosmos because we’re human, and our nature is to fly.”