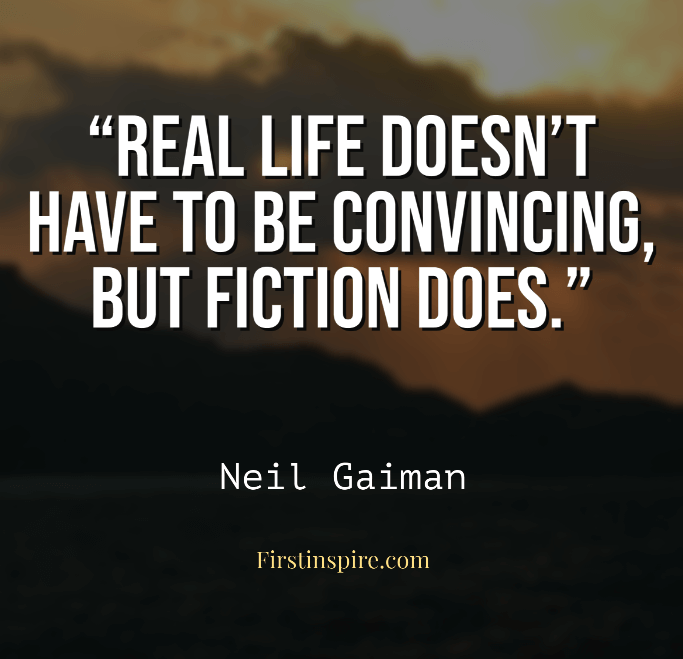 Neil Richard MacKinnon Gaiman or simply known as Neil Gaiman is an English author of short fiction, novels, comic books, graphic novels, nonfiction, audio theatre, and films. His works include the comic book series The Sandman and novels Stardust, American Gods, Coraline, and The Graveyard Book. He has won numerous awards, including the Hugo, Nebula, and Bram Stoker awards, as well as the Newbery and Carnegie medals. Here are some of the inspiring Neil Gaiman quotes.

“I’ve been inspired by dreams – I’ve even stolen scenes or images or characters from them.”

“Everything in journalism is about the detail that makes the whole, the attempts to reproduce speech patterns while not actually quoting the whole thing the person said.”

“Everybody has a secret world inside of them. I mean everybody. All of the people in the whole world, I mean everybody â€” no matter how dull and boring they are on the outside. Inside them they’ve all got unimaginable, magnificent, wonderful, stupid, amazing worlds… Not just one world. Hundreds of them. Thousands, maybe.”

“There’s not much high and low culture any more: there’s just mingling streams of art and what matters is whether it’s good art or bad art.”

“We have the right, and the obligation, to tell old stories in our own ways, because they are our stories.”

“We get to experience the same thing in very different ways with different parts of ourselves.”

“There are a lot of artists who’ve said they’d like to work with me. To be honest, I’m not sure there is such a thing as an inappropriate artist. The trick is matching the artist with a story.”

“I lived in books more than I lived anywhere else.”

“Libraries are our friends.”

“Life is always going to be stranger than fiction, because fiction has to be convincing, and life doesn’t.”

“Make glorious, amazing mistakes. Make mistakes nobody’s ever made before. Whatever you’re scared of doing, Do it.”

“The world always seems brighter when you’ve just made something that wasn’t there before.”

“I was thinking one of the great things about fiction is we, as a race, only get to look out of our own eyes at the world. And fiction is a fantastic way of looking out through somebody else’s eyes.”

“Every lover is, in his heart, a madman, and, in his head, a minstrel.”

“Fiction takes us to places that we would never otherwise go, and puts us behind eyes that are not our own.”

“The real world has no obligation to be convincing, so it throws up some very weird moments sometimes.”

“You have to finish things – that’s what you learn from, you learn by finishing things.”

“There is something about riding a unicorn, for those people who still can, which is unlike any other experience: exhilarating, and intoxicating, and fine.”

“The one thing that you have that nobody else has is you. Your voice, your mind, your story, your vision. So write and draw and build and play and dance and live as only you can.”

“I’m probably slightly more famous than I’ve been comfortable with. Famous enough to have my phone calls returned is about as famous as I want to be.”

“If it’s true that every seven years each cell in your body dies and is replaced, then I have truly inherited my life from a dead man; and the misdeeds of those times have been forgiven, and are buried with his bones.”

“I really like being able to laugh at my own jokes.”

“Face your life, its pain, its pleasure, leave no path untaken.”

“In a novel, you can always go back and make it look like you knew what you were doing all along before the thing goes out and gets published.”

“Break rules. Leave the world more interesting for your being here.”

“I loved the fact that I was suddenly no longer dependent on whether a store took out an ad in the right place, or on the word on the street.”

“It is a fool’s prerogative to utter truths that no one else will speak.”

“Rock and roll stars have it much better than writers when they’re on a tour.”

“It’s not a bad thing for a writer not to feel at home. Writers – we’re much more comfortable at parties standing in the corner watching everybody else having a good time than we are mingling.”

“Write your story as it needs to be written. Write it honestly, and tell it as best you can. I’m not sure that there are any other rules. Not ones that matter.”

“What are these fundamental principles, if they are not atoms?” “Stories. And they give me hope.”

“Stories may well be lies, but they are good lies that say true things, and which can sometimes pay the rent.”

“The trouble with everything, these days, for me, is time. There is only one me. There are a ridiculous number of demands on my time. There are so many things I’m trying to do. It’s so much more about when I’m going to get time to do it, if I get time.”

“You get what anybody gets – you get a lifetime.”

“The problems with success, frankly, are infinitely preferable to the problems of failure.”

“This is how you do it: you sit down at the keyboard and you put one word after another until its done. It’s that easy, and that hard.”

“Writing is flying in dreams. When you remember. When you can. When it works. It’s that easy.”

“There are so many fragile things, after all. People break so easily, and so do dreams and hearts.”

“Even nothing cannot last forever.”

“The future came and went in the mildly discouraging way that futures do.”

“A book is a dream that you hold in your hands.”

“If you dare nothing, then when the day is over, nothing is all you will have gained.”

“There’s none so blind as those who will not listen.”

“People populate the darkness; with ghosts, with gods, with electrons, with tales.”

“Wherever you go, you take yourself with you.”

“Trust dreams. Trust your heart, and trust your story.”

“The only advice I can give you is what you’re telling yourself. Only, maybe you’re too scared to listen.”

“Be hole, be dust, be dream, be wind/Be night, be dark, be wish, be mind,/Now slip, now slide, now move unseen,/Above, beneath, betwixt, between.”

“You see, the outcome of the battle is unimportant. What matters is the chaos, and the slaughter.”

“If you only write when inspired, you may be a fairly decent poet, but you’ll never be a novelist.”

“The best way to show people true things is from a direction that they had not imagined the truth coming.”