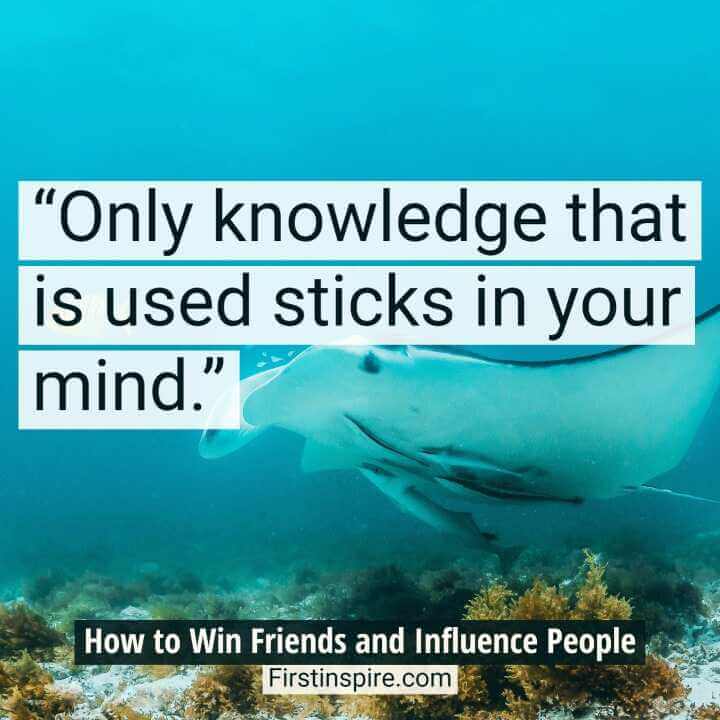 The book is useful for anyone who wants to be more confident, persuasive, and charismatic in social interactions, while also improving their relationships with other people. It can be a useful tool for office managers who need to motivate their employees.

“It isn’t what you have or who you are or where you are or what you are doing that makes you happy or unhappy. It is what you think about it.”

“Any fool can criticize, complain, and condemn—and most fools do. But it takes character and self-control to be understanding and forgiving.”

“When we hate our enemies, we are giving them power over us: power over our sleep, our appetites, our blood pressure, our health, and our happiness.”

“Don’t be afraid of enemies who attack you. Be afraid of the friends who flatter you.”

“I have come to the conclusion that there is only one way under high heaven to get the best of an argument— and that is to avoid it. Avoid it as you would avoid rattlesnakes and earthquakes.”

“Actions speak louder than words, and a smile says, ‘I like you. You make me happy. I am glad to see you.”

“Talk to someone about themselves and they’ll listen for hours.”

“If You Want to Gather Honey, Don’t Kick Over the Beehive”

“That is what every successful person loves: the game. The chance for self-expression. The chance to prove his or her worth, to excel, to win.”

“Everybody in the world is seeking happiness—and there is one sure way to find it. That is by controlling your thoughts. Happiness doesn’t depend on outward conditions. It depends on inner conditions.”

“Instead of condemning people, let’s try to understand them. Let’s try to figure out why they do what they do. That’s a lot more profitable and intriguing than criticism; and it breeds sympathy, tolerance and kindness. “To know all is to forgive all.”

“By becoming interested in the cause, we are less likely to dislike the effect.”

“If some people are so hungry for a feeling of importance that they actually go insane to get it, imagine what miracle you and I can achieve by giving people honest appreciation this side of insanity.”

“By fighting you never get enough, but by yielding you get more than you expected.”

“Only knowledge that is used sticks in your mind.”

“All men have fears, but the brave put down their fears and go forward, sometimes to death, but always to victory.”

“Criticism is dangerous, because it wounds a person’s precious pride, hurt his sense of importace and arouse resentment.”

“Control your temper. Remember, you can measure the size of a person by what makes him or her angry.”

“If you tell me how you get your feeling of importance, I’ll tell you what you are.”

“The world is full of people who are grabbing and self-seeking. So the rare individual who unselfishly tries to serve others has an enormous advantage.”

“You cannot teach a man anything; you can only help him to find it within himself.”

“Action seems to follow feeling, but really action and feeling go together; and by regulating the action, which is under the more direct control of the will, we can indirectly regulate the feeling, which is not.”

“People who can put themselves in the place of other people, who can understand the workings of their minds, need never worry about what the future has in store for them.”

“The only way I can get you to do anything is by giving you what you want.”